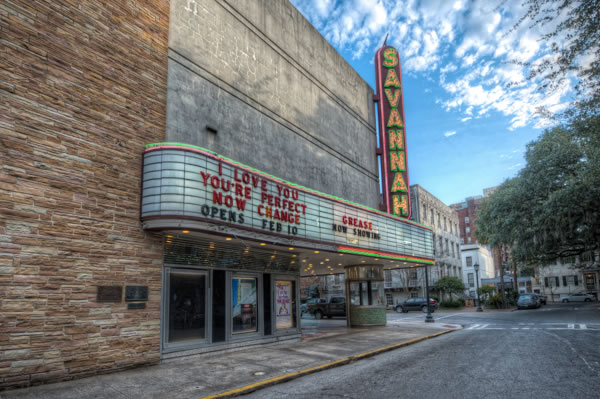 Join us on a Savannah Ghost Tour, and take a visit by the old Savannah Theater. The Savannah Theater is the oldest, continually operating theater in the United States. It opened it’s doors back in December of 1818 and was designed by William Jay in the Regency style of architecture. The opening night featured a comedy “The Soldier’s Daughter” and “Raise the Wind”. Many complaints were made about the ladies in the audience having hairstyles so tall the other patrons had a hard time watching the play!

A Fire: Ghost or Curse?

Stories from the Savannah Ghost Tours

The Hauntings began early in this theater, as you will learn on one of our Savannah Ghost Tours. A news article from 1895 interviews the theaters owner. In it, he recalls several strange occurrences.

He states that he came to the theater to open one morning, only to find where a small fire had started up overnight and had burned a hole in the floor of one of the dressing rooms. It had singed nothing else and had, apparently, put itself out!

He goes on the tell the story that several local police officers reported hearing strange noises coming from inside the theater late at night. There was never an official report made because the Officers were too afraid to investigate! Will you be too afraid while on the Savannah Ghost Tours?

In the Green Room, a rehearsal room near the McDonough side of the building, a group of female dancers were changing costumes. They suddenly felt a sensation of being watched by something they called a malevolent or evil entity. The feeling was so strong that they fled the dressing room in different states of undress. It must have been a good night for the local men to see such a spectacle!

Another fire broke out in 1906 several nights before the showing of the controversial play “The Clansman”, which was written by Thomas Dixon. But, this time it wasn’t the ghost, it was widely suspected that the KKK started the fire.

Unfortunately, there seems to be a curse that lingers about the theater.

When the theater was being remodeled in the early part of the 20th century a portion of a brick wall was opened up and a penny from 1818 was found stuck inside. Fred Weis, the owner of the theater at the time, carried around this penny as a good luck charm for many years afterward. Unfortunately, he lost the penny while in New York and the theater almost immediately caught fire which nearly destroyed it in 1948.

An Apparition can also be seen haunting the balcony and projection room. It is believed that it is a projectionist who died there.

Actors and the Man Who Shot Lincoln!

There have been many famous actors perform on the stage at the Savannah Theater. Among the were Fanny Davenport, E. H. Sothern, Julia Marlowe, Otis Skinner, Sarah Bernhardt, W. C. Fields, Tyrone Power, and Lillian Russell. 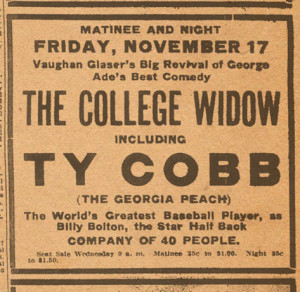 The College Widow excerpt from the Savannah News

One of the strangest shows, however took place in November of 1911. The theater was showing a performance of The College Widow, starring none other than the baseball legend Ty Cobb!

The Theater still sits in the same spot it always has on Chippewa Square, although it has had a face lift over the years. After one of our Savannah Ghost Tours, stop by for a show. You never know, you may get two shows, one by the actors and one by the ghost!