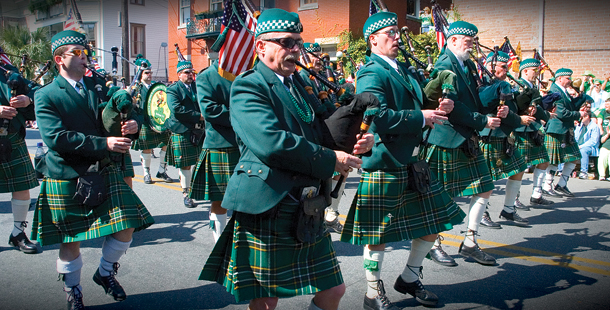 Parking during the Festivities is very limited, View the Parking and Transportation Page for help.

This year the St. Patrick’s Day Parade will be held on Tuesday, March 17. As is tradition, the Parade begins at 10:15 a.m. following celebration of Mass at the Cathedral of St. John the Baptist.

About the Parade
The parade begins at the corner of Gwinnett and Abercorn, and makes its way north on Abercorn to Broughton, where it turns east to East Broad Street. The parade turns north on E. Broad and then heads west on Bay, past City Hall, where it takes a left on Bull Street, ending at Harris Street.

There are many events around town, Click Here for a list of events associated with the Festivities.

Parks & Squares Guidelines
Parade patrons will not be allowed to set up in parks and squares until 6 a.m. Parade Day (Tuesday, March 17, 2015).

The only furniture allowed in squares are tables, coolers, lawn chairs and 10-by-10-foot tents. The following are among the items NOT ALLOWED in squares and parks: grills, amplified sound, kegs, scaffolding, advertisements, barriers, bartenders, private security.

All material should be removed from the square by 6 p.m. the day of the parade. The use of City electricity and water is prohibited.

Please be advised that it is against the City of Savannah’s policy to allow portable toilets to be placed in our parks and squares. We would remind you that portable toilets for private use are not allowed in the City Rights of Way, alleys, sidewalks or inside squares.

You do not need to purchase a wristband to enter the Entertainment Zone; it is only needed to consume alcohol on public property. Wristbands will not be required to consume alcohol in restaurants or bars. Restaurants and bars will not be responsible for patrons who do not have wristbands leaving their establishments with go-cup in hand. These establishments are encouraged to educate their customers, but the responsibility of complying is on the customer. Restaurants and bar customers who step outside the establishment to smoke will be allowed to have go-cup in hand without wristband.

The fine for violation of the wristband requirement is $67 (court costs included). There will be more than 20 fixed stations selling wristbands throughout the Entertainment Zone, as well as a number of roving sellers.

Entertainment Zone prohibited items: coolers, non-service animals, and fireworks/firecrackers (this includes items that don’t require a flame to ignite, such as poppers/snap-its noisemakers).

The Entertainment Zone is bounded by East Broad Street on the east, the Savannah River on the north, Martin Luther King, Jr. Boulevard on the west, and Broughton Lane to the south, from MLK to Drayton Street, where it moves north to Bay Lane.

Hours of Operation
Wristband enforcement in the Entertainment Zone will be active during set hours each day of the Festival: